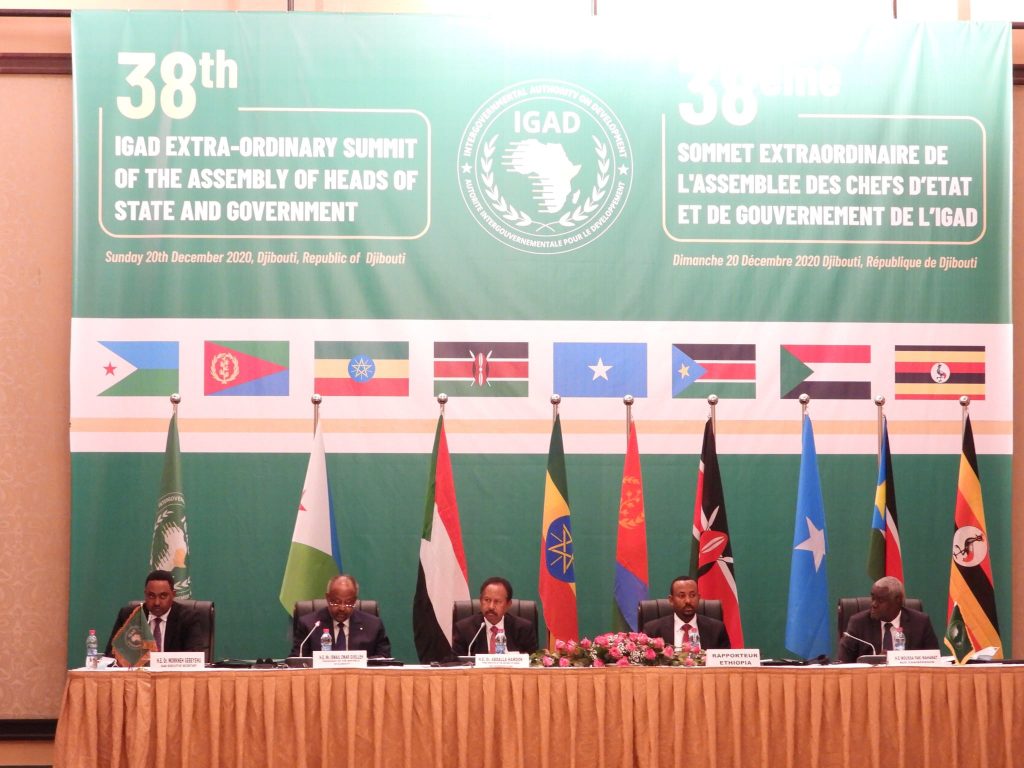 As the 38th IGAD Extraordinary Summit of Heads of States & Governments kicked off in Djibouti, Prime Minister  Abiy Ahmed and his delegation that comprises of the Deputy Prime Minister and Foreign Minister, Demeke Mekonnen were attending the Summit along with leaders of member states of the IGAD region.

Following a welcoming speech from President Ismail Omar Guelleh of Djibouti, Sudan’s President Hamdok, the Chairperson of the IGAD Assembly made remarks where he commended the IGAD and its member states for the huge success in combating COVID19, effectively forcing back the locust invasion & fast-tracking the democratic transition in South Sudan.

The President appreciated the spirit of brotherhood the leaders demonstrated to deliver lasting solutions in many areas & called on the international community to remain steadfast to their commitments in working closely with the regional organ.

Noting the need to do more on maintaining regional peace, President Hamdok expressed his firm belief that the summit will provide the necessary platform for dialogues on current pressing issues in the region.

Executive Secretary of IGAD, Dr. Workneh Gebeyhu in his remarks noted, against the backdrop of the Covid Pandemic, floods, and locust invasion Governments of member states have clearly shown their faithfulness to the vision of IGAD which made the regional organization won the confidence of international partners.

Dr. Workneh, congratulating the government and people of Sudan for being removed from the list of state sponsors of terrorism, noted that it will play a vital role in ensuring the political transition in the country.

The Executive Secretary mentioned the recently inaugurated Moyale One-Stop Border Post (OSBP) one among such commitments towards materializing the IGAD vision- regional integration.

Somalia-Somaliland talks in Djibouti spearheaded by President Ismail Omar Guelleh and Premier Abiy Ahmed showcased “our capacity to resolve our problems by ourselves,” he said.

Dr. Workneh, in light of taking a proactive measure on disease control, also called for the full operationalization of the IGAD emergency fund.

Chairperson of the African Union Commission Moussa Faki Mahamat, in his speech, commended the Government of Ethiopia for its bold steps to preserve the integrity of the country.

Mr. Moussa Faki also stressed the need to sustain efforts to help solve the issues of affected people in the aftermath of the operation.

According to the Ministry of Foreign affairs of Ethiopia, the current developments in the IGAD region, the state of COVID19 in the region, and corresponding responses, as well as other matters of regional concerns, will be discussed at the Summit.