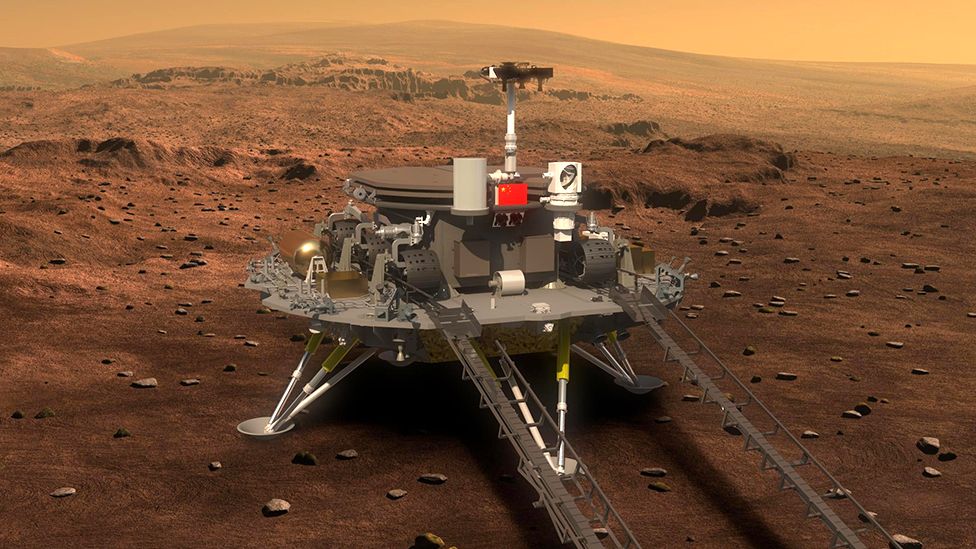 The six-wheeled Zhurong robot was targeting Utopia Planitia, a vast terrain in the planet’s northern hemisphere.

The vehicle used a combination of a protective capsule, a parachute and a rocket platform to make the descent.

The successful touchdown is a remarkable achievement, given the difficult nature of the task.

Only the Americans have really mastered landing on Mars until now. All other countries that have tried have either crashed or lost contact soon after touchdown – until now.

“You were brave enough for the challenge, pursued excellence and placed our country in the advanced ranks of planetary exploration,” he said.

The probe officially landed at 07:18 on Saturday, Beijing time (Friday 23:18 GMT), according to state media.

Zhurong, which means God of Fire, was carried to Mars on the Tianwen-1 orbiter, which arrived above the planet in February.

The time since has been spent surveying Utopia, taking high-resolution images to pinpoint the safest place to put down.

The aim with all such ventures is to pick a spot, as far as possible, that is devoid of imposing craters and large boulders.

Chinese engineers have to follow events with a time lag.

Every stage of the Zhurong’s approach to the surface therefore has to be managed autonomously.

The entry (into the atmosphere), descent and landing strategy follows a familiar architecture.

At the chosen moment, the rover, encased in an aeroshell, is released from the Tianwen orbiter and dives downwards, according to BBC.