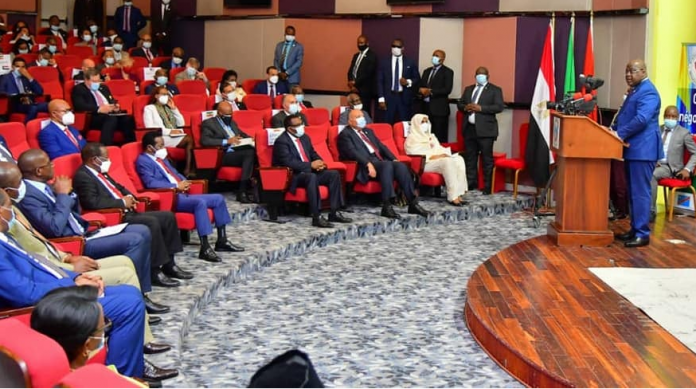 Ethiopia cannot enter into an agreement that would foreclose its current and future legitimate rights over the utilization of the Nile.

This was disclosed during the meeting of Foreign and Water Affairs Ministers of Ethiopia, Egypt, and Sudan held in Congo, Kinshasa to resume the trilateral negotiation on GERD under the auspices of the AU.

The Minister of State and Minister of Foreign Affairs of the Democratic Republic of the Congo (DRC) and the chairperson of the Executive Council of the AU chaired the Ministerial meeting that was held on 04-05 April 2021.

In his opening remarks, Deputy Prime Minister and Foreign Minister Demeke Mekonnen reassured Ethiopia’s commitment towards the successful conclusion of the trilateral negotiation.

Demeke underlined the rights of all the riparian countries to use the Nile River and the need for cooperation.

He further stressed the importance of reversing the monopoly of the use of the waters of the Nile by the downstream countries, according to the press release of the Ministry of Foreign Affairs.

Demeke also recalled the opportunity for cooperation created by the GERD and underscored the need to take the progress of the negotiation to its conclusion.

The Commissioner for Political Affairs, Peace, and Security of the AUC attended the Ministerial meeting which convened to review the progress of the negotiation and to chart the way forward.

Agreeing on the continuation of the three observers in the process (the Republic of South Africa, the United States of America, and the European Union), discussions were held on the proposed enhancement of the role of observers.

Accordingly, Ethiopia with its resolve to maintain the full ownership of the process by the three countries and the integrity of the AU-led process, agreed to accept the role of observers to share information and proposal when jointly requested by the countries.

On the other hand, Egypt’s and Sudan’s position of granting the observers the same role as the AU is not accepted.

At the end of the meeting, Ethiopia supported the draft communiqué submitted by the Chairperson of the AU with minor adjustments, the press release noted.

However, Egypt and Sudan rejected the draft demanding the role of observers to replace that of the three countries and the AU.

The two countries followed an approach that seeks to undermine the AU-led process and to take the matter out of the African platform.

They also stalled the resumption of the negotiation by rejecting a draft communiqué that contained the deliberations during the two days meeting. Rather both countries attempted to obstruct the process.

Ethiopia`s resolve to reach a settlement on the first filling and related operation of the dam failed to bear result due to Egypt’s and Sudan’s rigid stance to make the negotiation and the outcome a tool to affirm their self-claimed water share and foreclose Ethiopia’s share.

The second-year filling of the GERD will be carried out as scheduled pursuant to the Declaration of Principles (DoP).

In this context, Ethiopia expressed its readiness to facilitate data and information exchange on the filling of the dam.

The positions contesting the filling of the dam ahead of the conclusion of an agreement has no basis in law and contravenes Ethiopia`s inherent right to utilize its natural resource.

Ethiopia has enormous respect for the role played by the President of DRC, Félix Tshisekedi, and Chairperson of the AU for hosting the meeting to resume the trilateral negotiation.

Ethiopia reiterates its position in support of a trilateral process that will maintain the ownership of the countries and integrity of the AU-led process and commits to working towards the conclusion of the trilateral process.

Ethiopia expects the meeting will be resumed around the third week of April 2021.

Ethiopia expects the reconvening of the meeting upon the call of the current chair of the African Union.