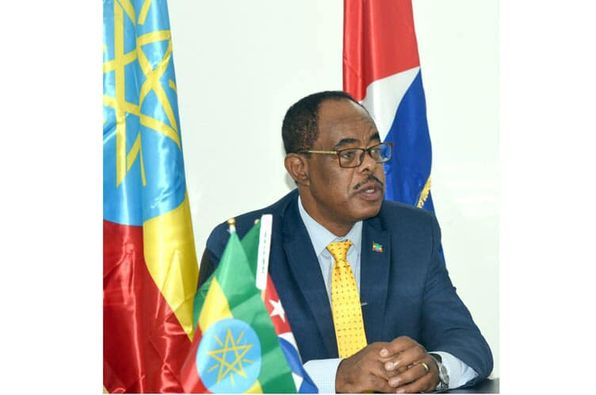 Addis Ababa, June 09, 2021 (Walta) – The African roots in the peoples of the Caribbean nations facilitate the relations that Ethiopia is interested in fostering today as a foreign policy objective, said Ethiopian Ambassador to Cuba, Shibru Mamo Kedida.

“Africa is the home and source of a civilization, a culture and ancient traditions that are inherent in the hearts of the Caribbean People,” said the Ethiopian Ambassador in an interview with Prensa Latina.

Ethiopia is very interested in cooperating with the Caribbean countries, which is vital to their overall development and essential in their active participation in regional and international platforms and forums, he argued. The Ethiopian government has “great interest in continuing to expand and deepen the collaboration with the Caribbean brothers because we share common development challenges and priorities, and we advocate strengthening our voices on these vital issues,” the Ambassador stressed.

Regarding relations with Cuba, he expressed that they are “historical, long-standing, deeply rooted and based on a solid foundation of friendship, founded on blood during the defense of Ethiopia’s sovereignty in the 1970s. Bilateral ties have been strengthened throughout these years in the execution of cooperation programs in various areas such as health, education, science, and technology.

The government is providing humanitarian assistance for the people in Tigray Region in collaboration with international humanitarian agencies, the Ambassador stated. Besides, the government is working on rehabilitating the social institutions and reconstructing the infrastructures that were damaged by the TPLF during the law enforcement operations.

Ethiopia is highly dedicated to unraveling the differences with the downstream countries and adhered to the African solutions to African problems, the Ambassador argued. In spite of the discouraging statements from Egypt and Sudan regarding the trilateral negotiations on the GERD, Ethiopia had continued the negotiation in good faith and with full commitment to resolve the issues and reaching a win-win solution, he argued.

The Sudan military attacked civilians and vandalizing their properties and invade the Ethiopian territory when the government shifted its resource and attention to restore the law enforcement operation in Tigray Region, the ambassador mentioned. Ethiopia repeatedly requested the Sudanese Military to return back to the November 6, 2020 status and maintain the status quo ante.

Ethiopia is scheduled to hold general elections on June 22, 2021. In this regard, 40 million people are registered to vote and 47 political parties are registered to participate in this historic election, according to the MoFA.