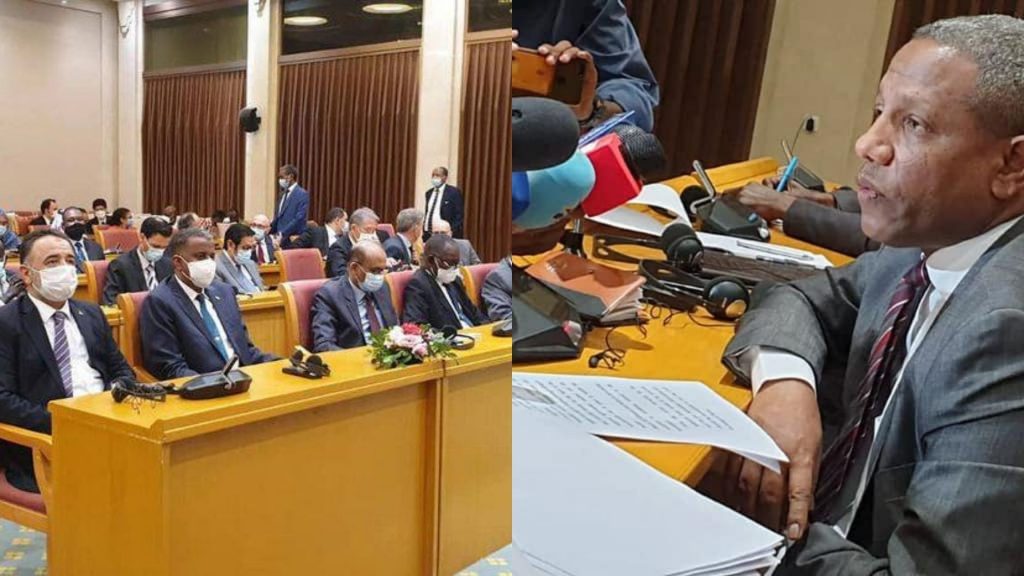 Ethiopian Ambassador to Sudan, Yibeltal Aemero underscored the need for Ethiopia and Sudan to resolve their differences on the boundary peacefully as per the bilateral agreements and joint boundary mechanisms put in place to handle the matter.

The Ambassador made the remark at a briefing session organized by the Sudanese Ministry of Foreign Affairs and National Borders Commission on Wednesday for diplomatic missions, consulates and international organizations accredited to Sudan.

During the briefing, the Ambassador particularly emphasized the significance of the Exchange of Notes made between the Foreign Ministers of the two countries on 18 July 1972 that provides for an amicable solution to the problem arising from settlement and cultivation North of Mount Daglish.

He further stated that, as per the 1972 Exchange of Notes, prior to the re-demarcation of the Gwynn line North of Mount Dagleish, the Joint Special Committee should submit to the Joint Ministerial Commission a report containing an amicable solution to the problem arising from settlement and cultivation.

Although the Ambassador indicated, the Joint Special Committee convened 8 rounds of meetings to carry out the task of proposing an amicable solution, it has not yet finalized its mandate.

Ambassador Yibeltal Aemero further stated that while the work of the Joint Special Committee was still in progress and when the Ethiopian National Defence Forces moved to the Tigray region on November 4, 2020, for law enforcement operation, the Sudanese Army taking advantage of the internal situation in Ethiopia entered inside Ethiopian territory and looted property, burned civilian camps, killed and attacked Ethiopians while displacing thousands in flagrant violation of the 1972 Exchange of Notes.

Besides, the Ambassador added, contrary to the spirit of friendship and cooperation existing between the two sisterly countries, the Sudanese Army took and controlled vacated Ethiopian Military Camps.

The Ambassador also underlined that Ethiopia which has been on the side of the Sudanese people during all times of difficulties does not deserve such an attack from the Sudanese Army while it was busy managing its own internal affairs.

Ambassador Yibeltal in his briefing also mentioned that all the recent unprecedented action of the Sudanese Army will complicate the bilateral relations including the pending task of the re-demarcation of the common boundary with huge implications to peoples of the two countries and the region at large unless corrected urgently.

He finally underscored Ethiopia’s firm commitment to peacefully resolve the boundary issue between Ethiopia and Sudan on the basis of the bilateral agreements reached and the joint boundary mechanisms put in place to handle the matter.

According to the Ministry of Foreign Affairs, the Ambassador further indicated Ethiopia’s view on the way forward as follows:

First, the recent intrusion by the Sudanese Army needs to be reversed and the pre-November 2020 status quo should be maintained as per the 1972 Exchange of Notes.

Third, the joint boundary mechanisms put in place for the re-demarcation of the boundary (Joint Boundary Commission, Joint Technical Boundary Committee, and the Joint Special Committee) need to be reactivated to discharge their mandates.