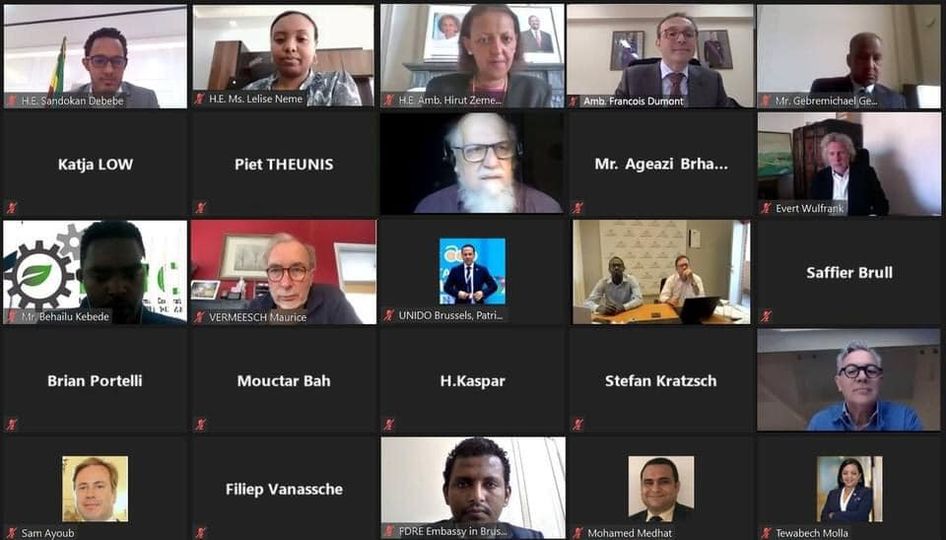 Addis Ababa, April 28, 2021 (Walta) – The Embassy of Ethiopia in Brussels organized an Investment Promotion webinar with the aim of familiarizing business communities in Belgium and Luxembourg about the going business environment.

Ambassador Hirut Zemene, Ambassador of Ethiopia to Belgium, Luxembourg, and the EU institutions, moderated the event.

She also stated that the business relationship between Belgium and Ethiopia is growing and that Belgian companies are active in the light manufacturing and horticulture sectors.

She also noted the structural and regulatory reform measures taken to improve the investment environment for existing and new investors.

She also stated that the recently launched ten-year development plan as well as the Home-Grown Economic Reform Agenda with a comprehensive and well-synchronized set of Macroeconomic, structural, and sectoral reforms will help ensure sustained growth. She encouraged participants to explore investment opportunities in Ethiopia and expressed the readiness of the Ethiopian Investment Commission to cater to their interests.

CEO of Industrial Parks Development Corporation, Sandokan Debebe, talked about the fast-developing and state-of-the-art industrial parks in various parts of the country. He also explained about facilities such as the one-stop-shop and customized incentive packages associated with industrial parks. He stated that there are 24 industrial parks in Ethiopia, of which 17 are owned by the government and seven are run by the private sector. He also emphasized these Industrial Parks have managed to retain 75% of their employees even under the COVID-19 pandemic.

Evert Wulfrank, CEO of Durabilis- KogaVeg PLC, ( Fair Fruit Ethiopia), one of the Belgian companies with a successful business story in Ethiopia, shared his company’s experience in Ethiopia. Last year, he said, his company shipped its first avocado production to Europe. He explained how his company has focused on the inclusion of smallholder farmers in the investment project that contributed its part in sustainable agriculture.

Following the presentations, participants raised issues related to the effective promotion and dissemination of investment opportunities in Ethiopia.

Ambassador Francois Dumont, Ambassador of the Kingdom of Belgium to Ethiopia, concluded by commending the Ethiopian Embassy for organizing this successful event and thanking the presenters for their extensive and important presentation.

According to The Ministry of Foreign Affairs, he also mentions that Belgium’s three regional investment and trade agencies intend to send a business delegation to Ethiopia and Rwanda in October 2021.

Participants of the event included representatives of chambers of commerce, regional investment and trade agencies, investors and business owners from Belgium, Luxembourg, Ethiopia, and the UNIDO office in Brussels.