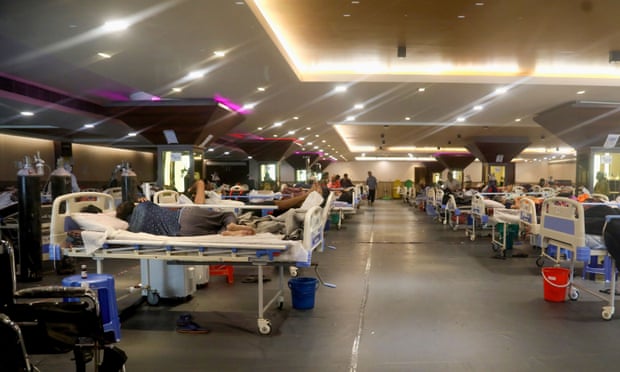 Addis Ababa, April 27, 2021 (Walta) – International aid has been arriving in India and a number of countries have pledged to join in the fight against Covid, as the country’s healthcare is system pushed to the brink of collapse by a deadly second wave.

On Tuesday morning, a flight from the UK carrying vital medical supplies including ventilators landed. Six oxygen containers will also be flown in from Dubai on Tuesday and in a phone conversation between Indian prime minister Narendra Modi and US President Joe Biden on Monday, Biden pledged “America’s steadfast support” to India by providing oxygen-related supplies and vaccine raw materials.

The US also committed to sharing with India some of its unused 60m doses of the Oxford/AstraZeneca vaccine, which has not been given approval by US authorities. India is due to open up its vaccine program to all adults on Saturday, but the country is already suffering from shortages of the jabs.

“Just as India sent assistance to the United States as our hospitals were strained early in the pandemic, we are determined to help India in its time of need,” Biden wrote on Twitter.

India recorded yet another day of over 300,000 new cases on Monday and 2,771 new deaths. However, health experts believe the official toll is far higher, with populous states such as Uttar Pradesh and Gujarat accused of undercounting Covid-19 fatalities and cases. With Covid testing labs overwhelmed in cities such as Delhi, many with symptoms have been unable to get a test.

The Covid positivity rate in Delhi continued to rise to over 35%, while in the city of Kolkata in West Bengal, a state which is still going through heavily criticized state elections, doctors reported it was almost 50%.

The crisis prompted the German army to provide a large oxygen production plant while France has said they will send supplies to India via air and sea, including eight oxygen concentrators, containers of liquid oxygen, and 28 respirators.

The EU said it would be sending medicine and oxygen to India in the coming days. “The EU is pooling resources to respond rapidly to India’s request for assistance,” said Ursula von der Leyen, the president of the European Commission, on Twitter.

“The situation in India is beyond heartbreaking,” said Tedros. “WHO is doing everything we can.”

Pledges of support have also come from Denmark, Saudi Arabia, the UAE, Australia, and Bhutan. The tiny kingdom which neighbors India also said it would be sending “a spare few hundred liters” of oxygen as soon as their newly built oxygen plant was up and running.

In March, India gifted Bhutan over half a million Oxford/Astrazeneca vaccines, which helped the country implement one of the world’s fastest vaccination rollouts, where it vaccinated 93% of the small population in just 16 days.

Many fear that the international aid being sent to India will not be enough to fill the acute gap in supplies of oxygen, which has been affecting hospitals in Delhi and Uttar Pradesh, despite the state’s chief minister insisting there was “no oxygen shortage” in Uttar Pradesh, and threatening private hospitals with criminal charges if they “spread rumors” about oxygen scarcity.

On Monday, Australia said it was suspending direct flights from India until at least 15 May because of the rising Covid cases. Thailand, Bangladesh, Singapore, and the UK have already placed limitations on air travel from India.