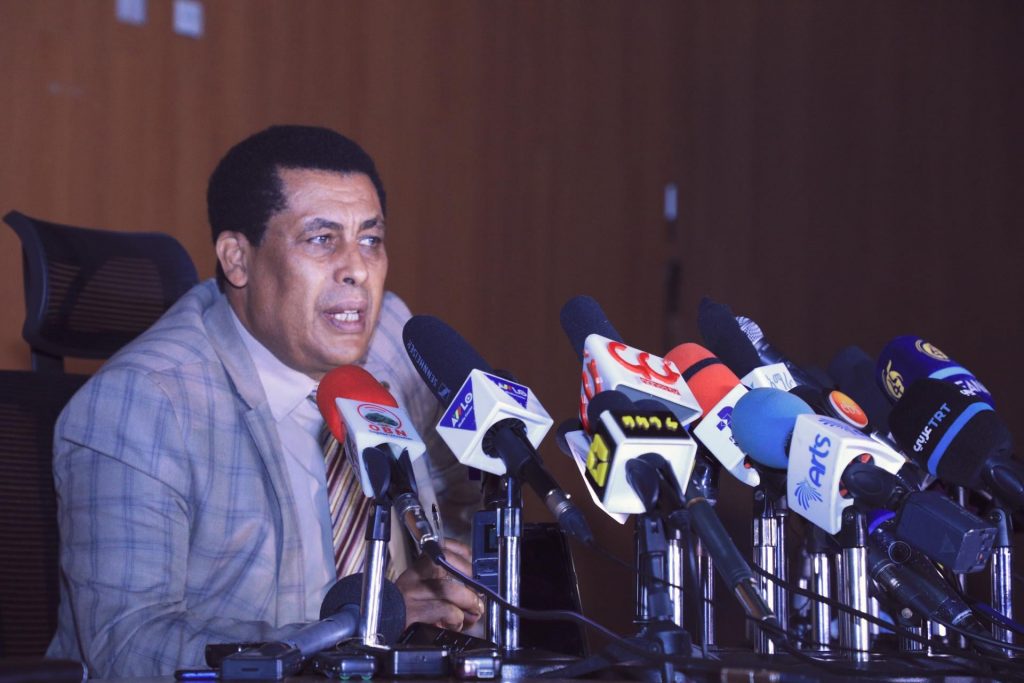 In his presentation, the Ambassador focused on political diplomacy, the upcoming general elections, the Ethio-Sudan border issue, Economic Diplomacy, and citizen-centered diplomatic activities.
According to MoFA, here is a Summary of the Press Briefing

Deputy Prime Minister and Foreign Minister, Demeke Mekonnen held discussions with the Regional Representative of the Office of the High Commissioner for Human Rights (OHCHR) for East Africa, Marcel Akpovo on Wednesday (April 28).

Demeke appreciated Marcel for the readiness of his office to support Ethiopia’s efforts in strengthening the promotion and protection of human rights in the country.

He also commended the recent joint agreement of the UN and EHRC to conduct joint investigations into human rights abuses allegedly committed in the Tigray region. In this regard, Demeke said the Ethiopian government is committed to bringing perpetrators to justice based on the findings of the joint investigation.

State Minister Ambassador Redwan Hussien has updated on Thursday (April 29) Ambassadors of Asian countries residing in Ethiopia on the current situations in Tigray, particularly on the progress on the humanitarian aid efforts, the negotiations over the Grand Renaissance Dam, the Ethiopia-Sudan border dispute, and the upcoming 6th national election.

Regarding the GERD negotiations, he said the international community should understand that all of the concerns of Sudan have been adequately addressed while Egypt has continued to project its irrational claims of protecting the colonial-era treaties by window-dressing the claim through various names and demands.

On Elections he said:

On the Issue of the Ethiopia-Sudan Border Dispute, the Ministry of foreign affairs of Ethiopia has issued a statement today refuting the recent statements of Sudan on the GERD and the Ethiopia-Sudan border issue as an unwarranted, provocative, and an increasingly bellicose propaganda campaign. It says Sudan’s mentioning of the Benishangul Gumuz regional state while talking about the GERD and border issues is contemptible.

Ambassador and Permanent Representative of Ethiopia to the United Nations TayeAtske Selassie had a consultation with Mark Lowcock, UN Under-Secretary-General Humanitarian Affairs and Emergency Relief Coordinator, on the humanitarian situation in different parts of Ethiopia. They noted the improved humanitarian access and underscored the need for clear cooperation and understanding in resource mobilization to respond to the needs. The mission had issued a statement expressing the great disappointment of the unsubstantiated allegations presented to the Security Council on 15 April 2021 by Mark Lowcock accusing the Ethiopian government of using hunger and rape as weapons of war and obstructing humanitarian access.

. In the refugee camps, where access and issues that are related to safety and security are raised, the government has taken immediate action by relocating and maintaining basic humanitarian services.

The following are some of the challenges observed in the region and the government of Ethiopia would like to extend its call to the international community for concrete support in delivering humanitarian support to those who are in need in the region:

China launched the Ethiopian Luban Workshop on Wednesday. The workshop will provide high-end technical skills training to help college students meet the requirements of the emerging global market. It will further promote vocational education and boost youth employment in Africa.China has already established 10 Luban Workshop in Africa for vocational training proposed in the Eight Major Initiatives in FOCAC 2018.