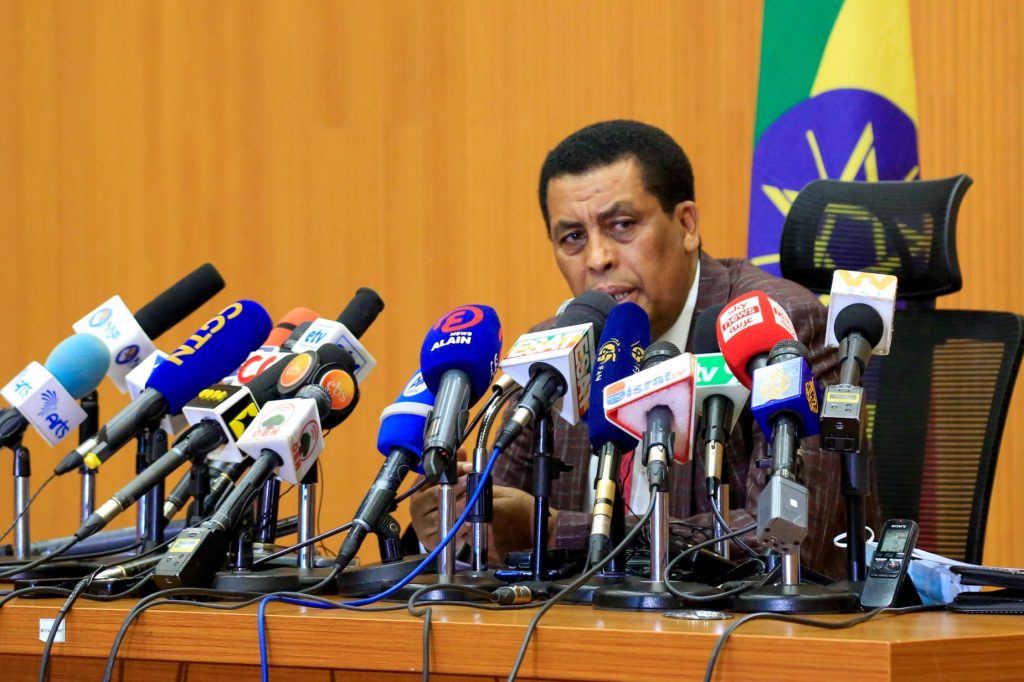 In his presentation, the Ambassador focused on political diplomacy, the GERD negotiation, the Ethiopia-Sudan border issue, and citizen-centered diplomatic activities.

Here is a Summary of the Press Briefing

Demeke Mekonnen, Deputy Prime Minister and Foreign Minister of Ethiopia received at his office on Tuesday (April 20), Ambassador Janez Lenarčič, EU Commissioner for Crisis Management. Their talks mainly focused on the humanitarian situation in Tigray. Mitiku Kassa, Commissioner for the National Disaster Risk Management Commission of Ethiopia (NDRMC) was present at the meeting.

– Raised concerns on the situation of IDPs

– Regarding the visa extension request by partners, Demeke said relevant authorities have been consulting the matter and it will be handled accordingly

– Access to communication equipment by humanitarian partners in the region will be handled according to the guidelines that have been recently prepared and distributed regarding the matter.

– there is a roadmap developed for national dialogue which will involve legal opposition parties in the region, Civil Society Organizations, elders, and other imminent personalities to get lasting peace in the region.

– The government is still the major player in serving the needs of affected people in the region, and the international community is expected to scale up humanitarian support.

– Regarding IDPs in the region, the government is ready to provide them voluntary, dignified, and safe returns to their homes or place them under the protection of host communities and temporary shelters for the time being.

Demeke Mekonnen, Deputy Prime Minister and Foreign Minister of Ethiopia received at his office on Friday (April 16) Maureen Achieng, International Organization for Migration (IOM) Chief of Mission to Ethiopia and Representative to AU and UNECA. In their discussion, the two sides covered Ethiopia’s measures in curbing illegal migration and experiences in addressing the needs of repatriated citizens. Achieng said IOM is committed to continuing to working closely with the Ethiopian government and the relevant authorities in addressing the needs of Ethiopian migrants, particularly in the context of the challenges posed by COVID-19.

Demeke Mekonnen, Deputy Prime Minister and Foreign Minister of Ethiopia last week on Thursday delivered an opening speech to an online discussion on GERD that was hosted by the Ethiopian Embassy in London and organized by the Ministry of Foreign Affairs of Ethiopia in collaboration with various Ethiopian Missions in Europe. He emphasized that neither politicization nor sabotage should guide policies over the Nile but promoting cooperation, understanding, and integration should be the guiding spirit.

On April 14 Ethiopian embassy in Moscow (on behalf of the Ministry of Innovation and Technology of the Federal Democratic Republic of Ethiopia) and the Russian State Atomic Energy Cooperation (ROSATOM) signed two MoUs on shaping positive public opinion concerning nuclear energy in Ethiopia and on cooperation in education and training in the field of nuclear energy of Ethiopia.

On April 16, 2021, Ethiopia has submitted its position to the UN Security Council on the AU-led tripartite negotiation on the GERD. The main points are:

– Ethiopia requests the UNSC to urge Egypt and Sudan to return to the tripartite negotiations on the first filling and annual operation of the Grand Ethiopian Renaissance Dam (GERD) and respect the AU-led process.

– The AU-led process has enjoyed the full support of the UN Security Council based on the principles of complementarity and in the spirit of finding African solutions to African problems.

– The two countries chose to “scuttling” the negotiation and “internationalizing” the issue to exert undue pressure on Ethiopia.

– Ethiopia has unwavering commitment and trust over the AU-led tripartite negotiation and expressed the country’s gratitude for the genuine efforts of South Africa and now the Democratic Republic Congo to address the matter in the spirit of African solutions for African problems.

– Ethiopia’s initiative on data exchange before the commencement of the second filling of the dam in the upcoming rainy season had been declined by the two downstream countries declined.

– Ethiopia is firm and committed to the Declaration of Principle (DoP) that was signed by the leaders of the three countries and noted that Egypt and Sudan are reneging their commitment that they have entered under the DoP.

– Unlike the Sudanese side of the story, 59 of the so-called Ethiopian soldiers are farmers while the remaining are militiamen

– In the absence of a military response from the Ethiopian side, the Sudanese government is claiming for capturing and handing over Ethiopian soldiers to the government of Ethiopia to misinform the world as if Ethiopia is participating in an armed border conflict

– The government of Ethiopia would like to stress that it has no wish to engage in an armed conflict with Sudan, and it rather needs to solve the issue peacefully by employing existing conflict resolution mechanisms and in the spirit of the 1972 Exchange of Notes between the two countries

– State Minister Birtukan Ayano discusses with Ethiopians and people of Ethiopian descent in Washington, New York, Minnesota the importance of standing together to fight defamation and misinformation and safeguard the interests of the country in some critical issues (Such as the GERD). Ethiopian Diaspora associations have handed over-collected funds for the GERD from each of the stated areas while they detailed their performance report on the occasions. In her remarks to the audiences, State Minister H.E. Ambassador Birtukan Ayano highlighted that the support of Ethiopians and people of Ethiopian descent is crucial to the success of the upcoming elections, the second filling of the GERD, and the government’s efforts to ensure peace and stability.

– 1059 Ethiopians have been repatriated from Jeddah, Yemen, and Riyadh last week in collaboration with IOM (International Organization for Migration), according to MoFA.