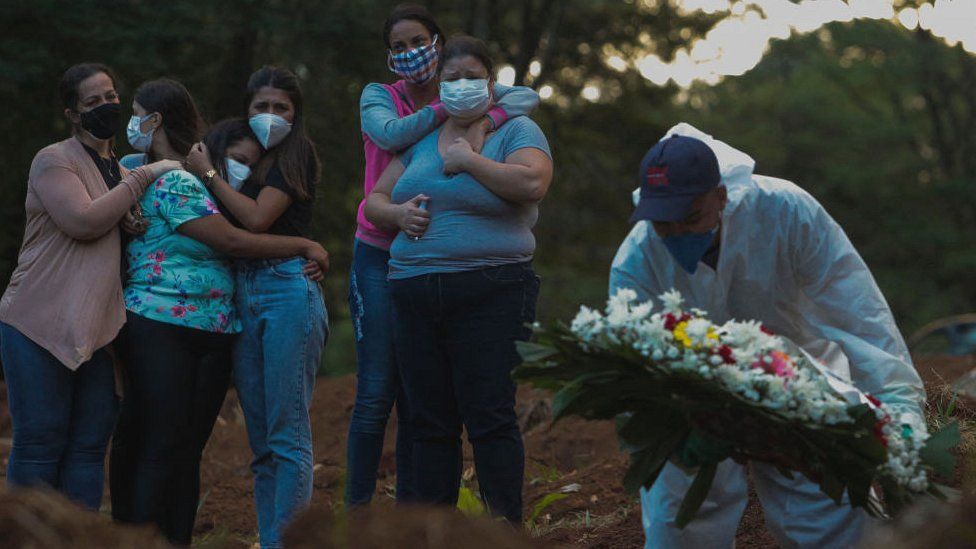 The country’s health service has been pushed to the brink as cases of the virus continue to climb.

President Jair Bolsonaro has faced intense criticism for his handling of the crisis and was hit by high-profile resignations this week.

But on Wednesday he again railed against lockdown measures imposed by local governors and mayors.

“We had, and we have, two enemies – the virus and unemployment! It is a reality! We are not going to solve this problem by staying at home,” he said.

Wednesday also saw a further 3,800 new deaths and over 90,000 new coronavirus cases. Brazil’s daily deaths currently account for about a quarter of all coronavirus fatalities in the world.

New chiefs of the army, navy, and air force were announced on Wednesday to replace those who resigned on Tuesday in an apparent protest at the sudden sacking of Defence Minister Fernando Azevedo e Silva.

Bolsonaro and his minister had clashed over the issue of the armed forces’ loyalty, which the defense minister said should be directed to upholding the constitution rather than supporting the president personally.

The role of the armed forces in Brazilian politics has been a sensitive issue since the country’s return to democracy in 1985 after 21 years of military rule.

His announcement came on the anniversary of the 1964 coup that brought the military to power.

He said the military would “not be found wanting when the country needs it”. The day before he had raised concern by saying the coup had “pacified the country” and should be celebrated.

President Bolsonaro, a former army captain, himself prompted outrage in 2019 when he organized a commemoration of the coup.

As well as losing his defense minister, Bolsonaro also had to replace his foreign minister and five other cabinet ministers. Marcelo Queiroga, a cardiologist, became the fourth health minister since the pandemic began, according to BBC.