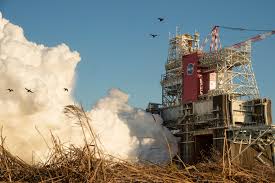 An issue with hydraulic systems led to the premature shutdown of a key test for Nasa’s new “megarocket”.

Officials said the way components had been set up to respond in the test was “a little conservative” and that this led to the early stop.

Contrary to earlier concerns, there was no sign of damage to the huge core stage of the Space Launch System (SLS).

More powerful even than the Apollo-era Saturn V, the SLS will return astronauts to the Moon this decade.

The rocket consists of a core stage, with four RS-25 engines at its base, and two smaller solid rocket boosters (SRBs) attached to its sides.

Later this year, it had been due to launch Nasa’s next-generation crew vehicle – Orion – on a loop around the Moon. No astronauts will be aboard for that mission, which is primarily intended to test the hardware.

Nasa is still undecided about whether it will try to re-run the test or ship the 65m-long vehicle section to Florida’s Kennedy Space Center (KSC), where it will be prepared for its maiden flight.

Despite speculation that the November 2021 launch date will slip, officials said the SLS could still make that date.

On Saturday, engineers from Nasa and Boeing – the rocket’s prime contractor – conducted a “hotfire” test of the rocket’s four powerful RS-25 engines at Stennis Space Center, near Bay St Louis in Mississippi.

The core stage was anchored to a massive steel structure called the B-2 test stand on the grounds of the Stennis facility.

After filling the rocket segment with more than 700,000 gallons of liquid hydrogen and oxygen propellant, they had hoped the RS-25 units would fire for eight minutes – roughly the amount of time it takes for the SLS to get to space.

However, teams would have obtained all the engineering data they needed to certify the rocket for flight after 250 seconds.

In the event, the engines thundered to life on Saturday evening (GMT), generating a massive plume of exhaust that dwarfed the trees surrounding the test site. However, they shut off after just over a minute of firing.

He added: “We’ve learned from the data that the shutdown did occur as the result of a couple of test parameters we had set on the hydraulic system that’s powered by the core stage auxiliary power units.

“What we’ve done for this test program, in order to protect the flight hardware, is intentionally be a little conservative with our test parameters.”