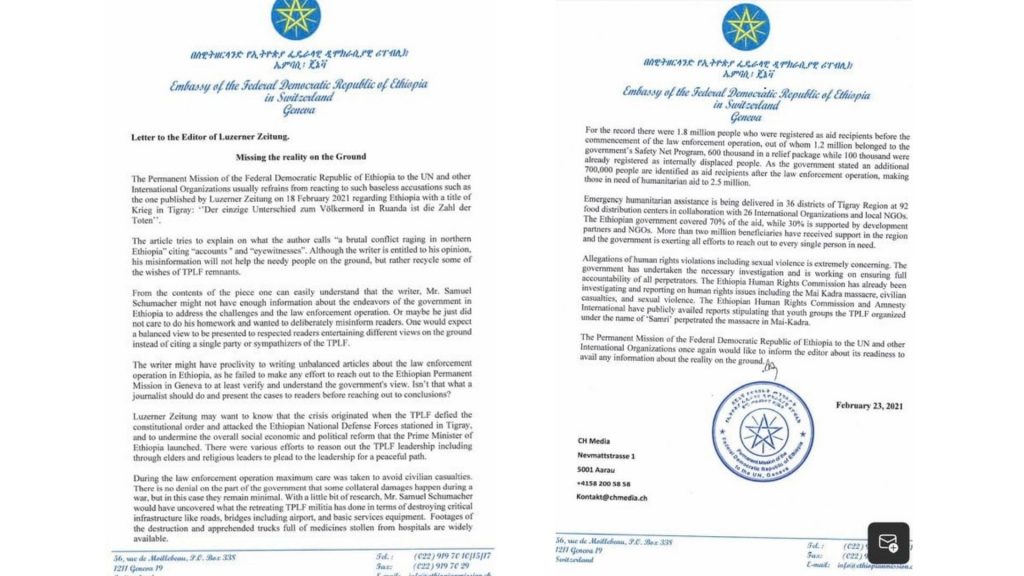 Addis Ababa, February 24, 2021 (Walta)– The Permanent Mission of the Federal Democratic Republic of Ethiopia to the UN and other International Organizations issued a statement that rebuts an article published by Luzerner Zeitung newspaper on 18 February 2021 regarding Tigray.

According to the permanent mission, the newspaper issued baseless accusations on 18 February 2021 regarding Ethiopia with the title of Krieg in Tigray: ‘‘Der einzige Unterschied zum Vélkermord in Ruanda ist die Zahl der Toten”’.

The article tries to explain what the author calls “a brutal conflict raging in northern Ethiopia” citing “accounts” and “eyewitnesses”, the statement says.

Although the writer is entitled to his opinion, his misinformation will not help the needy people on the ground, but rather recycle some of the wishes of TPLF remnants.

From the contents of the piece one can easily understand that the writer, Mr. Samuel Schumacher might not have enough information about the endeavors of the government in Ethiopia to address the challenges and the law enforcement operation, the permanent mission outlined.

“Or maybe he just did not care to do his homework and wanted to deliberately misinform readers. One would expect a balanced view to be presented to respected readers entertaining different views on the ground instead of citing a single party or sympathizers of the TPLF.” it indicates.

The permanent mission added that the writer might have a proclivity to writing unbalanced articles about the law enforcement operation in Ethiopia, as he failed to make an effort to reach out to the Ethiopian Permanent Mission in Geneva to at least verify and understand the government’s view. Isn’t that what a journalist should do and present the cases to readers before reaching out to conclusions?

Luzerner Zeitung may want to know that the crisis originated when the TPLF defied the constitutional order and attacked the Ethiopian National Defense Forces stationed in Tigray, and to undermine the overall social-economic, and political reform that the Prime Minister of Ethiopia launched.

There were various efforts to reason out the TPLF leadership including through elders and religious leaders to plead to the leadership for a peaceful path.

During the law enforcement operation, maximum care was taken to avoid civilian casualties. There is no denial on the part of the government that some collateral damages happen during a war, but in this case, they remain minimal.

With a little bit of research, Mr. Samuel Schumacher would have uncovered what the retreating TPLF militia has done in terms of destroying critical infrastructure like roads, bridges including airports, and basic services equipment. Footages of the destruction and apprehended trucks full of medicines stolen from hospitals are widely available.

For the record, there were 1.8 million people who were registered as aid recipients before the commencement of the law enforcement operation, out of whom 1.2 million belonged to the government’s Safety Net Program, 600 thousand in a relief package while 100 thousand were already registered as internally displaced people. As the government stated an additional 700,000 people are identified as aid recipients after the law enforcement operation, making those in need of humanitarian aid 2.5 million.

Emergency humanitarian assistance is being delivered in 36 districts of Tigray Region at 92 food distribution centers in collaboration with 26 International Organizations and local NGOs. The Ethiopian government covered 70% of the aid, while 30% is supported by development partners and NGOs. More than two million beneficiaries have received support in the region and the government is exerting all efforts to reach out to every single person in need,

Allegations of human rights violations including sexual violence are extremely concerning. The government has undertaken the necessary investigation and is working on ensuring full accountability of all perpetrators. The Ethiopia Human Rights Commission has already been investigating and reporting on human rights issues including the Mai Kadra massacre, civilian casualties, and sexual violence. The Ethiopian Human Rights Commission and Amnesty

International have publicly availed reports stipulating that youth groups the TPLF organized under the name of ‘Samri’ perpetrated the massacre in Mai-Kadra. The Permanent Mission of the Federal Democratic Republic of Ethiopia to the UN and other International Organizations once again would like to inform the editor about its readiness to avail any information about the reality on the ground, the permanent mission added.