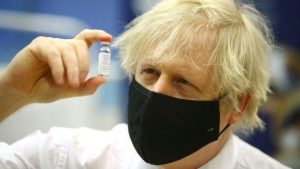 Addis Ababa, June 07, 2021 (Walta) – Prime Minister Boris Johnson is to urge leaders of other wealthy countries to commit to vaccinating the world against Covid-19 by the end of next year.

He will lay out a global target at a summit of the G7 group of advanced economies on Friday.

The US, France, Germany, Italy and Japan have all said how many doses they will donate to the global vaccine-sharing programme, Covax.

But the UK and Canada are yet to put figures on their planned contributions.

Ahead of the G7 summit, which will take place in Cornwall from Friday, Johnson said he would ask his counterparts to “rise to the greatest challenge of the post-war era” by “vaccinating the world by the end of next year”.

Such an achievement would be the “single greatest feat in medical history”, he said.

The UK will also encourage more discussion about how manufacturing can be stepped up.

The summit will be the G7 leaders’ first face-to-face meeting since the start of the pandemic, and US President Joe Biden’s first visit to the UK since taking office.

The US has pledged to donate 80 million vaccine doses to poorer countries, while other G7 countries have offered much smaller numbers, according to BBC.