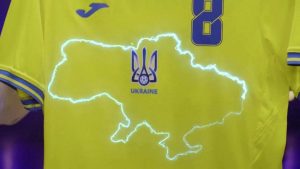 Ukraine unveiled its shirt for Euro 2020, emblazoned with its borders including Crimea and the slogan “Glory to Ukraine!” Russia annexed the Crimean peninsula from Ukraine in 2014, and considers it a part of its territory, something rejected internationally.

A Russian MP called it a “political provocation”.

The head of the Ukrainian football association, Andriy Pavelko, revealed the kit in a video on his Facebook page on Sunday, days before the European Championship kicks off.

The front of the yellow shirt shows the contours of Ukraine in white, including Crimea and the pro-Russian separatist-controlled regions of Donetsk and Lugansk.

A slogan on the back reads “Glory to Ukraine!” – a patriotic chant used as a rallying cry by protesters who forced out a pro-Moscow president, Viktor Yanukovych in 2014.

“We believe that Ukraine’s silhouette will give strength to the players because they will fight for all of Ukraine,” Mr Pavelko said

She said the slogan was nationalistic and echoed a Nazi rallying cry, according to BBC.