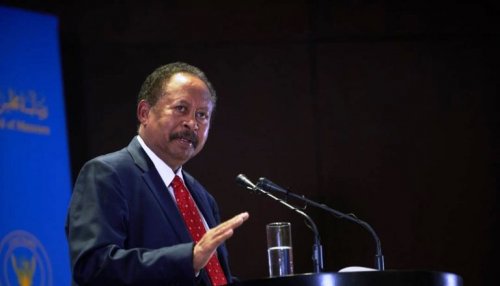 Addis Ababa, April 14, 2021 (Walta) – Sudan’s Prime Minister Abdallah Hamdok has called his Egyptian and Ethiopian counterparts for a closed-door meeting over the filling and operation of the Grand Ethiopian Renaissance Dam (GERD), after the failure of the Kinshasa discussions, a week ago.

In a meeting held from 3 to 6 April in the capital of the Democratic Republic of Congo Kinshasa, the three countries failed to reach a deal over a four-way mediation to broker a final settlement on the GERD filling and operation.

The Sudanese cabinet in a statement released on Tuesday said the invitation is in line with the Declaration of Principles of 23 March 2015, which provides to hold talks at the level of heads of states or prime ministers if their delegations fail to settle a dispute.

“Since the parties have failed to reach an agreement through direct talks or African Union brokered negotiations, Sudan calls for a closed meeting between the prime ministers of the three countries via video-conference,” reads the statement extended to Sudan Tribune.

The statement further said this meeting should take place within 10 days.

The meeting aims to evaluate the stalled negotiations on the GERD, to discuss possible options to break the deadlock and renew the political commitment of the three countries to reach an agreement in a timely manner in accordance with the DoP signed between the three countries.

” It is regrettable that ten years of negotiations have elapsed without reaching an agreement,” despite the significant progress made during the meetings mediated by the United States and the World Bank, further said Hamdok.

The three countries have agreed on more than 90% of the agenda of the talks. Among the remaining issues, there are the conflict resolution mechanism, drought and other environmental issues, and data sharing.

Recently, Addis Ababa proposed to exchange data on the filing of the GERD without signing a legally binding agreement.

Ethiopian officials refuse to sign a legally binding agreement fearing that it would allow the downstream countries to prevent the construction of three other dams they plan to build in the future.

So, the government of Prime Minister Abiy Ahmed proposed to start a new process from the scratch, to include a water-sharing deal in the process, or to sign two separate agreements one on the filling and another on the operation of the giant dam.

Sudan and Egypt reject these proposals stressing that any proposal should be based on the 2015 DoP and build on what has been achieved.

They also asserted Ethiopia’s right to future development, underscoring that they want guarantees that these projects would not harm the downstream countries.

It is expected that the Sudanese prime minister would reiterate his call for a genuine political will based on the interests of the three countries and their joint destiny.

Hamdok’s invitation is seen as the last attempt to reach a legally binding agreement before resorting to the UN Security Council and to avoid further escalations in the region if the parties fail to strike a deal.